Having to clear the air yet again...


I know I said in my previous post that that was all that needed to be said about Brenda Negri, but good Lord this woman just refuses to take her meds and grasp hold of reality! I let it go on too long last time before addressing the outright lies she tells in her pathetic effort to make herself seem dedicated...

On one of the latest versions of her site where she is again bashing other breeders... she talks about how others are selling what Brenda does not believe are "real working Spanish Mastiffs" and that the dogs are run with a "handful" of goats or a "small bunch" of "dwarf sized show goats" (this from a woman who has more then twice the number of dogs then she does sheep or goats on about 2 acres - house and out buildings included!). She goes on to say that it's not what she would call "testing ground for real predator issues". Brenda recently posted a picture of a dead chihuahua and bragged about how her "real" LGD's had killed it...oh yeah, that sure is testing those dogs against real predators!!

Brenda has admitted on numerous forums that the only predators she has to deal with are dogs (you know - like that chihuahua), no wolf, coyote, bear or mountain lion. All of which are well documented here in my area. Wisconsin has one the largest wolf populations in the country, but we haven't been bothered by them even when close neighbors have, because my dogs are DOING THEIR JOBS! I have not lost a single one of my extremely valuable "dwarf sized show goats" (most commonly known as Nigerian Dwarf Goats - the fastest growing dairy goat breed in popularity in the US today) to any of the large coyote population here either. I have seen how my dogs have reacted to bear, coyote and mountain lion and THAT is what I would call "tested" against real predators!

She says that I spend more time showing my goats than I do focusing on my dogs because (according to Brenda who has never been to my farm) my dogs are not my top priority. Really!? My dogs are healthy, active, well socialized and trained for the work they do 24/7 (because 4 of my dogs live with the goats - not just thrown into a small pen with them for photos). In other words - they are doing exactly what they are bred and trained to do. I didn't purchase my livestock so I could claim that my Spanish Mastiff's are working (like Brenda did), I purchased the breed to protect the investment I have in my herd like any responsible farmer would/should.

I certainly do more educational events with my dogs every year than goats shows! I take the dogs out there in public so thousands of people can meet them every year and learn first hand about the breed and see them in person! This is documented, and there is no one in this country who has made this kind of effort to educate the public about the breed.
My adult daughter takes care of the animals when I am gone for the day at a show (a whole FOUR times this year!).
I have lost two puppies out of FIVE litters because of my focus on my dogs health and well-being. Brenda lost 7 or 8 from one litter alone shortly after they were born...maybe she was too busy on the computer to focus on the whelping mother...

Speaking of focus and priority, Brenda recently posted truly horrifying pictures of an emaciated Patron who has been sick for about 10 months now. You can count every rib. The poor dog looks like he just escaped Auschwitz, but unfortunately for him, he is still there... 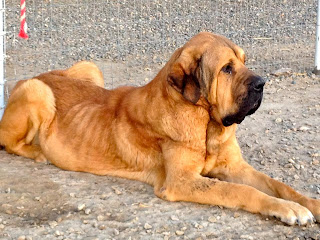 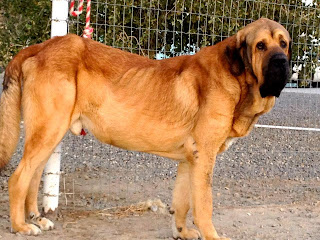 Patron is brother to my wonderful dog Zoe, and Brenda is now suggesting possible genetic issues for his problems. For all her claims of vet care, I seriously have my doubts based on comments she made elsewhere as well as her lack of knowledge about some of the basic suggestions others made to her in an effort to help the dog. If she had taken him to all, or any of the vets and specialists she claims, they would have figured this out by now through blood tests, biopsies, x-rays, etc...Maybe Brenda believes that she is a vet now... Hard telling.

Highlighted comments below are my own and I removed comments made by others.

Cinco Deseos Ranch Livestock Guardian Dogs He feels great for his condition actually. We've tried everything, for everything....not even special food helps. Of course have dewormed him numerous times, all the time....tried holistic stuff, meds, etc. I just put him on Sulfa and Metro and a steroid now and then for a bit and it helps some but then stops working. But he works, plays, runs....just about 50 pds too light although at one point Mel he was too fat - 210! HUGE....just too heavy for working dog. So he's about 40 pds off here now. Still has such a presence about him though!
September 15 at 6:42pm

It would be truly wonderful for the poor dogs in Brenda's care if she would stop playing these stupid games and make it a PRIORITY to FOCUS on the health and well being of her own dogs...Unfortunately, I don't see that happening since it would mean cutting into her own profit! Just like any puppy mill would, she has already proved that she is more than willing to jeopardize her own dogs to make a buck, such as evidenced above and her willingness to breed her bitches back to back even after delivering larger litters.
There should be an addendum on Brenda's website that states UNLESS THERE IS MONEY INVOLVED "I rest my bitches between litters, breed selectively and never "puppy mill" litters"...

Such a shame.
Lois Jordan http://www.fallcreekfarm.net
Posted by Fall Creek Farm Spanish Mastiffs at 12:18 AM 11 comments:

Fall Creek Farm Spanish Mastiffs
Here at Fall Creek Farm, we are dedicated to raising and breeding healthy and structurally sound dogs that have the correct temperament to do the job they were bred for - protecting both livestock and their property. I fell in love with the Spanish Mastiff when our first arrived in 2003 and 10 years later, I am still being impressed by their abilities and temperament daily! http://www.fallcreekfarm.net